A new evangelism is sweeping across Africa. 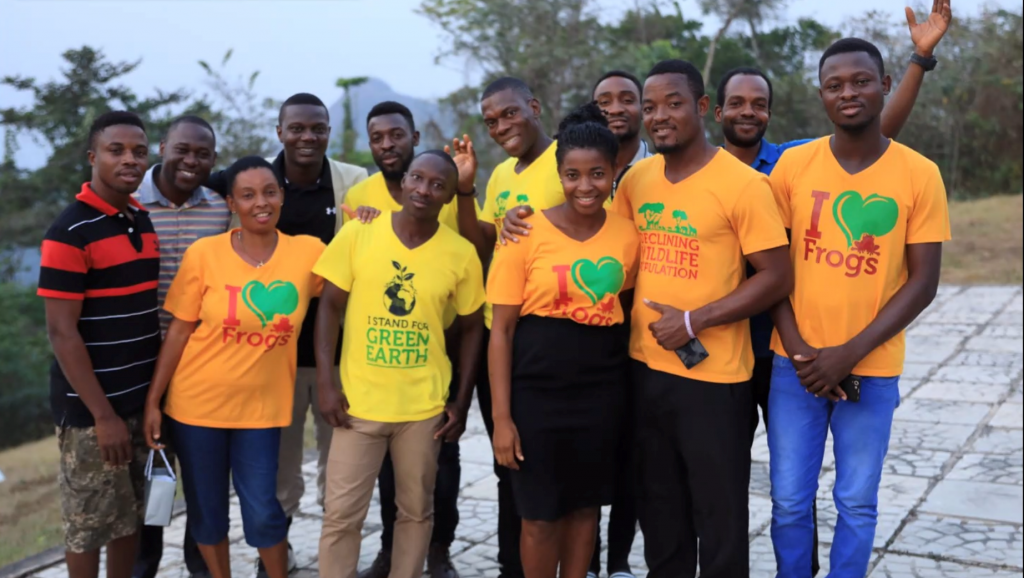 When he was a young zoologist and learned that many frogs and other West African amphibians were in danger of extinction, persecuted because of a lack of knowledge, and misguided beliefs, Caleb Boateng-Ofori jumped into action. He focused his career on frogs, studied them to PhD level, and became the first professional herpetologist in Ghana.  At just 40 he was a senior researcher with Ghana’s research council.  Independently, Caleb set up Herp conservation Ghana, through which he has discovered species new to science, helped establish conservation sites, and he evangelises big time – teaching about the wonders and value of amphibians, and engaging children, traditional leaders, faith and other community groups with amphibian conservation.  Caleb has won international awards for his work with local communities, he was a Tusk conservation award finalist in 2021, and this week was guest speaker on our Pan African webinar series.

Everyone present picked up new information about frogs, and several myths were busted.  Caleb told us about a frog that whistles rather than croaks, and another that delivers live young rather than laying eggs. We learned that while it is wise to wash hands after touching a frog or toad, there are no poisonous frogs native to Africa. However, certain chemicals produced by frogs and toads to protect their skin from bacteria and fungi have been found to contain chemicals that have potential to cure major diseases, including HIV.  Caleb was able to explain how frogs, which depend on water have intriguing strategies to survive the hot, dusty and dry harmattan season in west Africa – some species excrete a crystal case, they hibernate inside, until the next rainy season.

Many of us knew that frogs are an important food source for people in certain areas, but few were aware that some species are facing an unprecedented and unsustainable scale of commercial harvesting.  Not only loss of habitat, and poisoning from polluted waterways, but there is danger of some species of frog being eaten into extinction.  We learned not to buy frogs in bushmeat markets!

A big take home message was the value of frogs in our ecosystems – learning that they eat the larvae of mosquitoes and other insects motivated many participants to put frog projects on their Environment club agenda for next school year. The children from St Teresa’s primary school in Entebbe, pictured joining us from Uganda Wildlife Education Centre (below) asked if it was possible for them to do something to help frogs at their school, what they could do to provide a refuge.  Caleb’s advice, to create a small pond, surrounded by vegetation, will surely be adopted by a number of his newly recruited ambassadors! 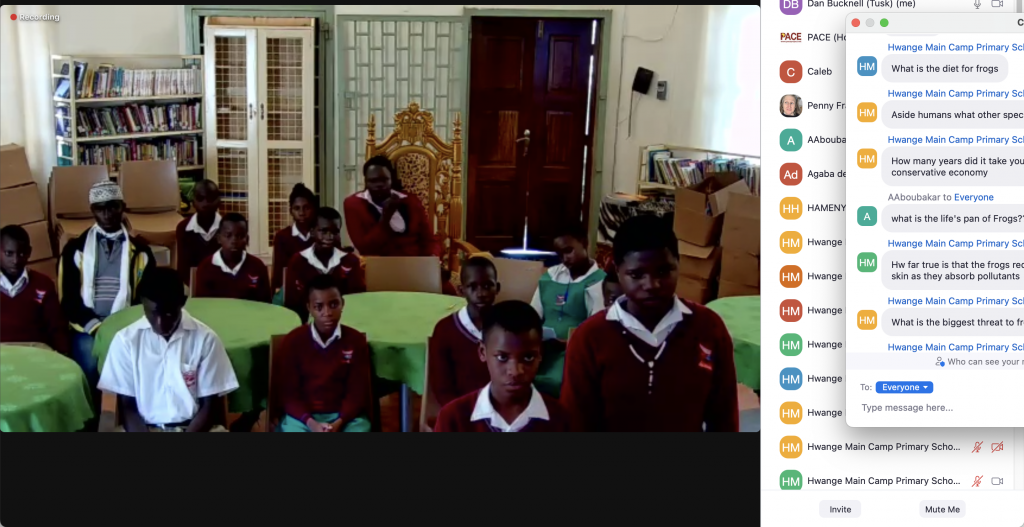 We were pleased to welcome new webinar participants on Tuesday, from Nigeria, Cameroon and Zambia as well as regulars from Zambia, Tanzania, Zimbabwe, South Africa, Kenya, Uganda, Cameroon.  Caleb’s impact was summed up by our producer, a teacher and youth leader – ‘I never bothered to even know different kinds of frogs ….  I am learning soo much!’

Thank you Caleb, for a fascinating talk, for encouraging the youngsters, answering their long stream of questions and growing a generation of Frog protectors.