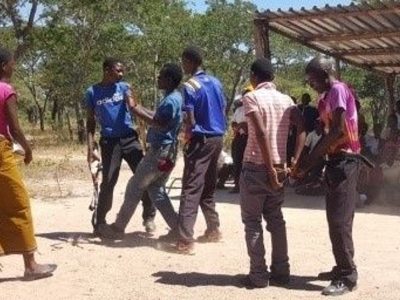 Students from three schools performed drama shows to an audience of parents, peers, the local councillor and guests from the Ministry of Education at Rhino Zibagwe Secondary school recently. The young people were sharing their ideas on ways to live in harmony with local wildlife.

It was an initiative of Sebakwe Conservation & Education Centre who use PACE materials and drama as ‘edutainment’ – learning and entertainment at the same time. It has special appeal, and holds the attention of  parents who are thrilled to watch their own children ‘on stage’.

Teachers and students in three schools (Tagwireyi, Gutsaruzhinji and Rhino Zibagwe) used term one to work through the PACE Living with Wildlife module and then come up with a drama to present to their parents and other community members.

Various aspects and challenges of living with wildlife were brought out, from poaching, problem animals, intercations with responsible authorities such as Parks and Wildlife Authority, support or lack of from the judicial system in conservation issues.

“It was evident that much thought was put into the suggested solutions to the challenges from Living with wildlife. In their drama, one could see the learners critiquing solutions in regards to how effective they are, and if there are other options to explore.”

“It was an event filled with fun and learning. In appreciation of the effort put by the schools and the support from the parents the drama teams and selected parents will tour Sebakwe Recreational Park to see rhino and other species living wild in natural habitat.

We were pleased with the support from the local councillor and the ministry of education. As stated in his speech, the councillor was able to appreciate the depth of the relationship between living with wildlife and developmental issues in the ward through watching the dramas.”

The performaces were judged – based on evidence of exploring the PACE module and relating it to local context. This encouraged teachers and learners to work through the module and issues thoroughly as well as decide how best to pass the ideas on to their parents and communities.

This is just one of the techniques SCEC use for communicating good practice for Living With Wildlife across the school system and communities where they work.