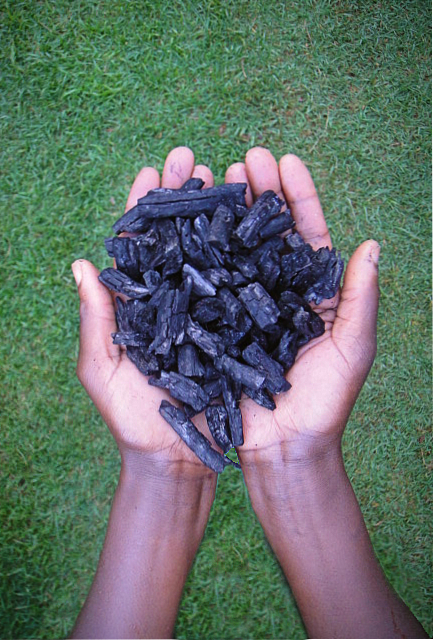 Carbon neutral cooking is good, but Carbon negative cooking is even better. Biochar can achieve just that, along with multiple other benefits to the environment and human well-being.

We learned about biochar from a family in north western Kenya where biochar has been central to life on their farm for nearly 20 years. It enabled them to reverse uncontrolled loss of tree cover and environmental degradation caused by high consumption of fuel wood.  It has ensured that they have clean, safe drinking water, free from impurities and good to drink, at no cost.  It resulted in cleaner air because their simple homemade biochar stoves produce little or no smoke.  Their biochar is used as a soil improver to raise the productivity of local people’s fields and home gardens. It has also relegated the hard labour of collecting and chopping heavy firewood for local kitchens, a gruelling task assigned to women and children, as something for the history books.

How does this all fit together?  Spencer’s Farm  designed a simple domestic  stove that cooks using small amounts of fuel, small pieces of wood, twigs and tree litter that can be collected on the ground. No logs or heavy wood are needed.  It has all the advantages of other improved stoves, and creates biochar as a by-product.  A by-product that is used to filter water, and as a soil improver that increases crop yields, significantly, especially on poorer soils. It is also a valuable food supplement for domestic animals, and when added to animal bedding reduces odours and insects and produces extraordinary fertiliser.

Biochar is similar to charcoal. It is wood, or other biomass, that has been ‘burned’ with very little oxygen. The process is called pyrolysis rather than burning.  Having just the right, limited amount of oxygen reaching the wood when it is ‘charred’ in the stoves allows the tars and oils to burn away. As they burn heat is produced – that’s what is used for cooking. The charred woody part, the biochar, is left behind.  It is made of carbon.  When charcoal is made the tars and oils in the wood remain, meaning that it is denser, with a high energy content that makes it good fuel. When charcoal is used as fuel the carbon is released, leaving ash.  Biochar in contrast is a fantastic way to use energy in wood, and reduce the release and build up of atmospheric CO2.  When biochar is mixed into the soil, because it is carbonised, its carbon does not break down, it can stay there for hundreds or thousands of years, acting as a carbon sink.   It also acts as a ‘reservoir’ for nutrients and important micro-organisms.

We’ve worked with Graeme Boyd-Moss, and his father at Spencer’s Farm to produce a new Action sheet that explains more about biochar – what it is, its properties, different ways to make it and most importantly how you can put the simple artisanal methods from Spencer’s Farm into use to improve, lives, livelihoods and the environment in your own area.  The action sheet explains practically how to use biochar for cooking, making water safe to drink and improving soil.  It explains how biochar helps mitigate climate change and where you can learn more about other simple, practical ways it can be used at family and community level.  The Biochar action sheet, #88, is currently being reviewed and tested in the field, we’ll share the final version very soon.  In the meantime you can read about using biochar for BBQs and background info on www.biocharbbq.co.uk