PACE students at the Collège Evangelique de Nkongsamba – in the shadow of the Manengouba Mountains in Cameroon learned about  Wildlife and Living alongside Wildlife last week. Led by geography teacher Laure Diffomene students watched two PACE films about Living with Wildlife, they read sections of the PACE book, L’Afrique Notre Habitat and then discussed what they’d learned and how it linked to what they knew before.  They talked about some of the local wildlife that is considered particularly important in their families and communities, then selected and drew animals that they thought may be endangered, due to hunting and other reasons. 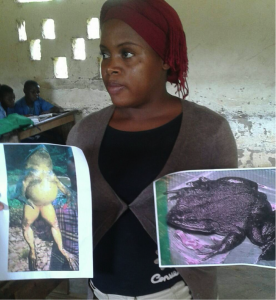 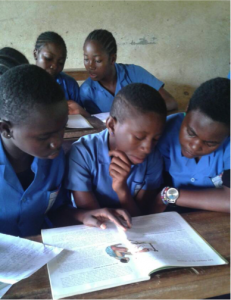 It is the world’s largest frog, can weigh up to 3.2 kg, reach 32 cm long and lives in their area.  The youngsters, most of whom come from farming families, knew about the super-big frog that lives in local streams, but not that it was a threatened species, nor that it was globally significant.

From their reading students reported learning, with surprise, about some of the health risks of hunting and handling wildlife and bushmeat. ‘Certains ont dit que dans leur tradition la grenouille goliath est consommee pour la recherche de la protection. Pour eux, le consommateur de la grenouille est proteges contre les maladies mystiques.’  They said that some local people believe that eating the Goliath frog gives protection from unknown or mystical illness.   ‘But I was glad that they saw the need to protect these frogs, amongst themselves they were saying that we mustn’t let them all die out, like the dinosaurs did.’ 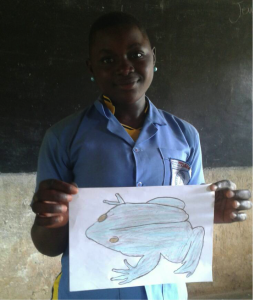 Thank you to Laure, for your great work bringing Conservation to young people.